Born in Shuri during 1889, Kenwa Mabuni was a descendant of one of the bravest warriors of Okinawan nobility.
Mabuni wanted to be so very much like his great ancestors, but as a child he was weak and sickly. In 1902 at the age of 13 he was introduced to the most famous martial artist in Shuri, Master Ankoh Itosu.
His family hoped that Itosu would be able to improve Kenwa Mabuni health and it is said that from that day onwards for almost seven years, Mabuni never missed a day training with Itosu.
Itosu encouraged Mabuni to further expand his knowledge of the martial arts and on the advice of his best friend Chojun Miyagi, Mabuni started to take lessons from Kanryo Higashionna of Naha. Something Mabuni did until the death of Higashionna in 1915.
During the same period Mabuni was also receiving instruction from Seisho Arakaki, also of Naha. He was teaching a similar style to Higashionna, Arakaki was also an accomplished Kobujutsu teacher and taught the young Mabuni Bo and Sai techniques which included various weapon forms. The White-Crane-Fist master Wu Xian Gui was also an influence on Mabuni at this time.
During 1915 on hearing of the death of Itosu legend suggests that Mabuni was so upset that he built a shrine in front of Itosua’s grave and looked after the gravemarker diligently for over a year Mabuni would practice kata daily at the graveside of Itosu out of respect and in honour of his late master.
After graduating high school, Mabuni completed his required military service, before becoming a policeman. Respected by his peers by 1918 Mabuni was an important figure within the martial arts community. It was around this time that Mabuni established a research and study group at his home, participating members included Chosin Chibana, Gichin Funakoshi, Anbun Tokuda, Shinpan Shiroma, Choju Oshiro, Seicho Tokumura and Hoko Ishikawa.
Originally Mabuni called his style Hanko Ryu (Half-Hard style) but later changed it to reflect the deep respect he felt towards his two great masters, Itosu and Higashionna.

The alternative kanji to Ito from Itosu can be read as Shi and Higa from Higashionna which can be interpreted as to, Mabuni created the name Shito for his his style of karate-do.
Mabuni worked tirelessly before and after the Pacific War to gain acceptance of his style in Japan, even moving to Osaka permanently to teach. Eventually his efforts paid off and Shito-Ryu became accepted.
Kenwa Mabuni died on May 23 1952. 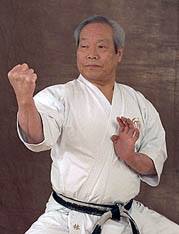 Hayashi was technical chairman of the World Union of Karate-do Organizations (W.U.K.O.) for more than 10 years, later reorganized as the World Karate Federation(W.K.F.), is the emeritus chairman of the referee council of W.K.F., and in 1995 received his 9th degree black belt from the Japan Karate Federation (J.K.F).  President of the Osaka Prefectual Karate-do Federation. President of the Higashi Osaka City Karate-do Association. Director of the F.A.J.K.O., one of the highest judges of the F.A.J.K.O. He is without doubt one of the foremost karate masters in the world today.

Soke Teruo Hayashi is one of the greatest and most famous masters of modern Karate. He is the founder, active headmaster and president of “Hayashi-Ha Shito-Ryu Kai School of Karate-do” and “Japan Kobudo Kenshin-Ryu-Kai”, and has its headquarters in Osaka, Japan. Hayashi was born in Nara, the old capital of Japan in the island of Honshu, in 1924. At age 14 began his martial arts training in judo having earned the rank of San Dan. At the age of 24 and after the war, he discovered Gojuryu karate and studied under Seiko Higa from 1949 to 1951 (Seiko Higa was a disciple of Chojun Miyagi and Kangyo Higaonna).

He has throughout his adult life displayed a fervor for learning karate perhaps matched only by one of his teachers, Kenwa Mabuni. His style is the result of over fifty years of research into and refining of the numerous Okinawan and Japanese Karate styles Hayashi Soke has studied over his amazing lifetime. Starting in Osaka, Japan, the birthplace of Shito-Ryu, Hayashi Soke studied under Kosei Kuniba, a chief disciple of Shito-Ryu’s founder, Kenwa Mabuni. Hayashi Soke did study briefly with Mabuni, but his daily instruction came from Kuniba, at least at first. It was not long, however, before the young Hayashi outgrew the experience Osaka had to offer.

Hayashi took what may seem to Westerner’s as an insane approach to choosing the Dojo at which to study. He would walk into the Dojo and challenge the Sensei to a fight. This, of course, incensed any students present at the time and they would insist on a chance to teach the chap a lesson themselves before their beloved Sensei would reduce himself to accepting a challenge from an upstart. This practice, some might say brave, others foolish, is actually a time honored tradition in Japanese and Okinawan cultures. It is known as Dojo Yaburi (challenge). While not practiced frequently these days, it was actually a common protocol when Hayashi was a young man. The way it worked was simple. The man that issued the challenge must first fight the lowest ranking man at the Dojo. If the challenger defeats the man then he is granted the right to fight the next lowest ranking man, and so on until the challenger is defeated or has himself defeated the Dojo’s Senpai (number one student). Then and only then is he allowed to challenge the Sensei himself, but is usually given the right to choose time and place as a reward for his previous efforts.

Hayashi became infamous for this practice, and resulting in being, very good at kumite. So much so that many Dojo refused his challenges outright and would not let them inside their doors. There were, of course, those that accepted. If Hayashi was beaten at one of these schools he would stay and ask for training. After all, what did he have to learn from those he himself had beaten! It was in this way that Hayashi sought not only knowledge, but respect from the Okinawans.

As a result of his tenacity Hayashi was able to garner much experience while on Okinawa. His primary teachers while on Okinawa were Nagamine Shoshin and Nakaima Kenko. From Nagamine Sensei he learned both the Shuri and Tomari lineages of kata. These kata tend to emphasize long linear stances and quick motion between stances. It was from this man that Hayashi learned the white crane form, Hakkaku.

From Nakaima Sensei, Hayashi learned a obscure family art called Ryuei-Ryu. This style is a southern tiger style imported from China four generations prior to Hayashi’s arrival on Okinawa. After a year of proving himself to the revered Nakaima, Hayashi was the first non-family member allowed to study the style. Hayashi incorporates much of Ryuei-Ryu’s theory into his own system.

Upon returning to Japan, Hayashi continued his study with Kuniba Kosei. From Kuniba, Hayashi learned the bulk of the Shito-Ryu syllabus, and as such it was the Shito-Ryu versions of the Naha kata that Hayashi was taught and still teaches. Hayashi was Kuniba’s number one student, and it was on his deathbed that Kuniba asked Hayashi to run his organization until his young son, Shogo, reached a level of maturity to assume leadership of the organization. Honoring his Sensei’s wishes, Hayashi became President of the Seishin-Kai until 1970 at which time Hayashi handed the mantle of leadership to the style’s rightful heir, Kuniba Shogo, and founded his own style called Hayashi-Ha Shito-Ryu.

We use cookies on our website to give you the most relevant experience by remembering your preferences and repeat visits. By clicking “Accept”, you consent to the use of ALL the cookies.
Cookie settingsACCEPT
Manage consent

This website uses cookies to improve your experience while you navigate through the website. Out of these, the cookies that are categorized as necessary are stored on your browser as they are essential for the working of basic functionalities of the website. We also use third-party cookies that help us analyze and understand how you use this website. These cookies will be stored in your browser only with your consent. You also have the option to opt-out of these cookies. But opting out of some of these cookies may affect your browsing experience.
Necessary Always Enabled

Performance cookies are used to understand and analyze the key performance indexes of the website which helps in delivering a better user experience for the visitors.

Analytical cookies are used to understand how visitors interact with the website. These cookies help provide information on metrics the number of visitors, bounce rate, traffic source, etc.

Advertisement cookies are used to provide visitors with relevant ads and marketing campaigns. These cookies track visitors across websites and collect information to provide customized ads.

Other uncategorized cookies are those that are being analyzed and have not been classified into a category as yet.